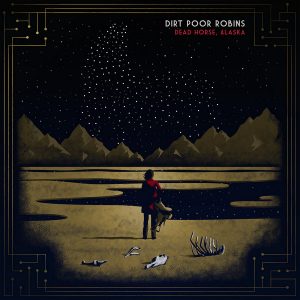 bt Media Group is always looking for acts that stray from the obvious genre's for which our area is known .   It's well established that Kentucky is an epicenter of rowdy, songwriter, Appalachian storytelling.  We've firmly set our foot on the top of these mountains and the nation with chart topping Kentucky native artists.  Our rich musical scene is full of great talent in all genre's.  Country, Rock, Pop, Metal, Folk...all are flourishing in what can only be described as a musical renaissance.  Each week bt Media Group scours Spotify, Bandcamp and the like to find those such artists.  Bands that shine no matter what genre they might fall.

While scouring our usual haunts for new music  we happily stumbled upon the new release, Dead Horse, Alaska.  Seeing that the genre tags included alternative, progressive, musicals, prog rock, theatrical, we just had to take a listen.  Hailing from Louisville Kentucky, Dirt Poor Robins has been releasing music since 2013.  Not just album releases.... how about a three act concept project release in 2013, 2014 & 2017.  According to the Dirt Poor Robins facebook the members include

<---listen here
Following in the tradition of DPR's first series of releases DEAD HORSE, ALASKA (RED) is the first of three E.P.'s planned for this summer/fall.  All are titled DEAD HORSE, ALASKA but with color distinctions.  Red, Gold then Black.  Each carrying a common theme but musically different.   The tracks are produced & mixed hot and modern.  Lyrically DPR weave storytelling, hope and longing together with a dreamy futuristic quality reminiscent of bands like The Neal Morse Band & Muse while still paying homage to bands like Queen and Bowie.

Track one: All There Is  is a very clean mixed song lead by  a staccato string melody and over driven bass.  Kate DeGraide's vocals  powerfully cover a nice range keeping out of the way of the underlining song melody all the while demanding that you listen to what she has to say.  The song eventually morphs into a larger production with more guitar, samples & ethereal back ground vocals.

Track two: Scarecrows leads off with piano arpeggios & vocals with background vocals ala Muse.  Synth bass and pads take over with a very memorable melody vocal line.  This song quickly builds to a Queen like crescendo before falling back to vocals and minimal instrumentation.  This song skates around the Minor / Major vibe flawlessly always teetering on melancholy and happiness.

Track three: Skywriter (my favorite song) is carried by strings, Kate's vocals & horns.  Electronic drums and keys help the song's build while lyrically the story intensifies.  Singability or hooks are sometimes thought to be left for pop & country but  Skywriter pulls you in with a great chorus ensuring you'll be singing it for the next few days.

Track four: Holiday takes on an other worldly storytelling vibe.  The vocal arrangement throughout this song is impressive.  Again DPR shows their producing/production skills keeping you on the edge with major/minor chord progressions.

The liner notes for the red release is as follows....

If you like music that defies description, you probably aren't reading this. If you are, why? It defies description. People that like Queen, ELO, Heart, ABBA, Pink Floyd, Radiohead, The Beatles, The Wizard of Oz, Moulin Rouge, Pan's Labyrinth, The Dream of Perpetual Motion, Edgar Allan Poe, Lewis Carroll, Steam Punk, Tweed Punk, Cyber Punk, Concept Records... this band is for you

What else can we say except go quickly and add these guys to your playlist, download the songs, follow them on facebook.... you know SUPPORT LOCAL MUSIC!