December 31st, 2015 marks the end of Mötley Crüe.  After more than 100 million in sales, 9 Albums & over 30 tours the guys are retiring the big hair and leather pants.  As someone who has actually worked with the Crüe , ( My concert labor company did a Mötley Crüe show in 2010) I can honestly say they are exactly like the persona they portray in interviews & videos.  Due to a technical problem with the building the house lights turned during the show I worked.  I had Tommy Lee & Vince Neil both screaming and threatening me from back stage calling me everything you can think of.  The funny thing is all I could do is stand there and think..” how cool is this… Tommy Lee is pointing his sticks at me calling me all sorts of names”..  An of course none of the building problems was my fault I just happened to be in their line of fire. 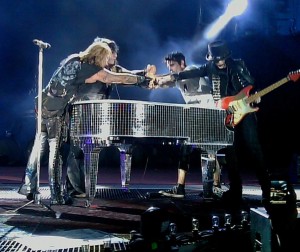 Love them or hate them Mötley Crüe firmly planted their mark in Rock and Roll history and will be missed by thousand of fans the world over.  Not to worry if you missed one of their last shows…A live DVD was announced on motley.com to be released soon!