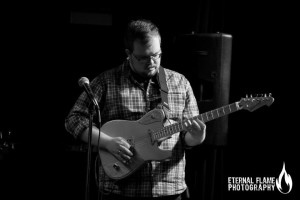 Cincinnati-based jazz guitarist and composer Brandon Coleman will show you how to turbocharge your blues playing with language from the jazz world!  Topics will include:

Brandon Coleman is one of the Midwest’s most acclaimed and rising jazz guitarists, dedicating his vision to expansive texture and energetic performances.  Born and raised in Pikeville, KY, Coleman went on to study jazz in university settings at Morehead State and University of Louisville.  Now a full-time performer, Coleman and his band play frequently across the nation, including performances at world-renowned jazz clubs such as Bar Next Door in NYC and the Bop Stop in Cleveland; as well as teaching clinics at universities and music stores.  CriticalJazz.com said of Coleman, “While New York City is widely considered the home for modern jazz guitar, Brandon Coleman is based out of Cincinnati and has the skills to jump into the jazz mecca of the universe with both feet. I have reviewed over three hundred guitarists in three years, Brandon Coleman leaps to the head of the class with his latest release ‘Decisions’…Coleman is special because he sounds like no one else. While his technical proficiency is beyond reproach, Coleman has an deceptively subtle artistic sense of harmonic movement that could be considered in the same style as that of a Bill Evans. One can pick out bits and pieces from a plethora of modern jazz giants but for sake of argument consider Danny Gatton meets John Abercrombie on the way to a Ralph Towner show if you feel the need to toss an arbitrary label on his craft.” Coleman endorses Curt Mangan Strings, Timbertones Picks and Timberwolf Guitars.