The Decemberists – I’ll Be Your Girl 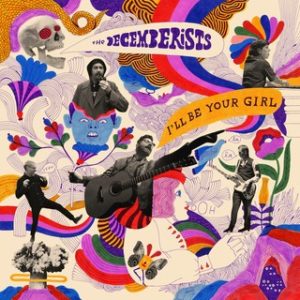 Usually when you first listen to a new band, within a few tracks you can nail down a couple of big influences and sometimes one major influence.

Today I received 12 tracks that totally shot down my influence theory.

For those of you in the “know”, The Decemberists totally have a unique sound and vibe all their own. As I listened to each track, I tried to find those influences and to be honest, they were too numerous to count. Now you may be thinking that would be a major turn off, but not true in this case.

Their latest album “I’ll Be Your Girl” is a crazy mesh of 80’s meets the 60’s with just a touch of modern rock thrown in the mix.

The opening track “Once In My Life” took me by storm. Very melodic vocals accompanied by an acoustic guitar seemed very unassuming and soulful. But, soon after the rest of the band swoops in with a very 80’s feel with big powerful keys.

It brought back memories of bands like Flock Of Seaguls “I Ran”, heavy on the keys with a deep flat snare. Even the pace was similar. I dare you to go right now to YouTube and find “I Ran” and tell me any different.

The more I listened, the more the 80’s influence came out. I say 80’s because each track will take you somewhere and it’s never the same, but it is all 80’s

What really sets them apart from others is the amazing vocals. Colin Meloy has a very distinct voice. Soft, but soulful with deep ties to folk singers of years past. It works perfectly though. It’s what I would imagine if James Taylor had joined a “Synth” pop band in 1984.

Each track is uniquely different while keeping with the albums feel or theme. The more guitar oriented “Sucker’s Prayer” feels like a great “Dive Bar” classic with it’s laid back rock and lonely lyrics.

The title track “I’ll Be Your Girl” oddly enough, was the biggest letdown. I’m not saying it was terrible, but given the rest of the album’s feel, it kind of just falls flat.

Though this album is a bit of a new sound for the band, I believe they are pointed in the right direction. While the User score and the Meta score are only slightly above average, I find this latest offering to be a breath of fresh air. Take this album, put it in your car and take a road trip, I feel confident it will draw you in.